Hamish saw a koala climbing a tree across the road from the school after lunch. He and Ryan went out to check and it confirmed it was safely in the tree and not near the road.

Mrs Cosgrove saw a koala in the tree in the lower playground on Friday afternoon. It was sleeping. We will need to teach our new younger students to respect animals by not trying to wake them.

Welcome to a new school year! A dark brown koala was assisted by Mr Mac to access the bottlebrush beside the tall gum at the front of the school next to the admin block. Mr Mac took a great photo. He was curled into a ball for most of the day and Mrs Fui made sure it crossed the road safely in the afternoon. 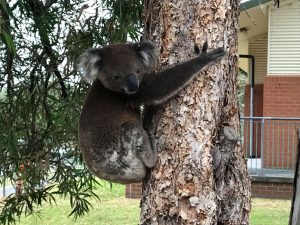 On Tuesday morning 1/2E saw two galahs and about three or four lorikeets having a fight outside the tree in 1/2E. They were fighting over a nest. All of the birds were screeching and flapping their wings. the lorikeets won the battle for the nest.

This week there was a koala sitting in the big tree outside the office. it was a boy koala because our cleaner heard it grunting in the morning.

On Monday, at after recess,  we saw a small female koala in the tree near the fixed equipment. It was half way to the top and sitting in the fork of the tree. When we saw it it was curled in a ball and then it stretched out and looked down.

In the holidays Mr H saw a young koala in the Swamp mahogany tree next to Mr Nix’s classroom. It is the first one we have seen for a little while since Kent passed away after a dog attack and Tough Bugger was killed by a car on Soldiers Point Road. We’ve been waiting for a new male to claim the area. Hopefully this is our new resident?? We arené seeing as many lately as their connecting habitat is decreasing.

This week there were new koala droppings on the pathway near 4/5G so we still have one around. It has been wet so the koala monitors have not been out in the mornings to check.